A few words are appropriate to describe DynCorp and it’s former Chairman and lead investor, Herbert S. “Pug” Winokur. Pug and his investment operation Capricorn Holdings were later to come under scrutiny when Pug resigned from the Harvard Corporation board at a time of controversy regarding his role as board member and chairman of the Finance Committee of Enron. Pug was serving on the board when Enron went bankrupt, after a period during which Harvard Endowment (where Pug was also on the board) was aggressively and profitably selling Enron stock. This raised questions as to whether the Endowment had the benefit of “insider information.” The extent of Harvard’s investments in Capricorn and its funds, if any, are unknown. On several occasions, Harvard and Capricorn have invested side by side.

Pug’s company Capricorn Holdings was based in Greenwich Connecticut. He and John Birkelund were long time board members of NacRe, a reinsurance company based in the Greenwich area that Dillon had been instrumental in helping to start. Breaking with the pattern of Dillon leaders being from New Jersey, John Birkelund lived in Connecticut and seemed very much part of the group in and around Greenwich. This group included Robert G. Stone, Jr., considered a leading light for many years behind the Harvard Endowment, particularly its oil and gas portfolio that invested in Harken Energy, a company made famous by George W. Bush’s role and stock profits. Like many other people in this story, both Birkelund and Winokur shared membership in the Council on Foreign Relations.

When Capricorn Holdings reduced its investment position in 1997, DynCorp appeared to be doing well. In addition to significant information systems contracts and subcontracts for DOJ and HUD, including lead contractor with a $60 million per year contract on the DOJ Asset Forfeiture Fund (working with the U.S. Marshals who manage forfeited assets for DOJ’s Asset Forfeiture Fund), DynCorp won new systems and litigation support contracts from DOJ in 1995 and 1996. This included the Justice Consolidated Network (J-Con) contract to run the consolidated network systems for parts of Justice. According to Inslaw President Bill Hamilton, DynCorp had been one of the successor contractors on managing the PROMIS system after DOJ had stolen it from Inslaw.

One of the contractors chosen with DynCorp to provide litigation support to DOJ was CACI, the leading provider of Geographic Information Systems to the federal government. Richard Armitage, a high-ranking official at Defense during the Reagan Administration and at the State Department during the Bush II Administration, was a consultant and member of CACI’s board from 1999 to 2001.

After DynCorp personnel were later the subject of several lawsuits related to pedophilia and sex slave trafficking in partnership with local mafia in Eastern Europe,[76] Armitage as a senior official at the U.S. State Department would write a letter in support of large new sole source contracts to DynCorp based on the theory that a company should not lose contracts as a result of the conduct of a few employees. In short, sex slave trafficking and pedophilia in its ranks did not prevent DynCorp from winning significant new contracts, including a $500 million sole-source contract to run police, enforcement, courts and prisons in Iraq. 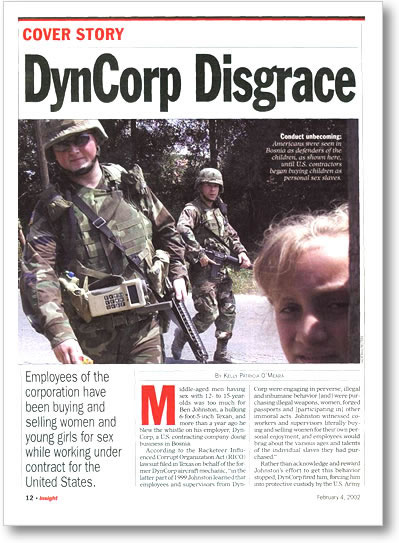 Letter from Deputy Secretary Richard Armitage re: Award of Sole Source Contract to DynCorp to Provide Police, Judiciary and Prisons in Iraq:

I came to look into DynCorp when I was contacted years later by a retired member of CIA covert operations who alleged that:

(i.) DynCorp was helping to manage the PROMIS software system through its J-Con System at DOJ; and

(ii) the project manager for DynCorp on the J-Con contract had falsified evidence against me using the PROMIS system and that is what got the investigation against The Hamilton Securities Group and me going. I e-mailed the project manager at DynCorp, however he never responded.

It is hard to find reliable information on the PROMIS software system and alleged successor systems. However, I believe that understanding the use of such digital information weaponry and its ability to compromise private and public financial and banking systems (including transactions such as the HUD loan sales) as well as governmental enforcement and military systems is integral to understanding the manipulation of the US federal credit and financial markets and the centralization of political and economic power.